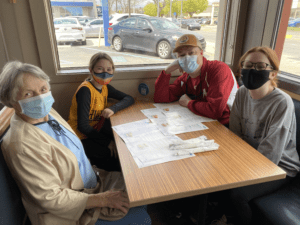 Kasia moved to the United States from Poland in 1973 to work as a housekeeper in Bryn Mawr for another Polish family that came over to escape the German invasion in the late 1930s.  Kasia still lives in this home. She tells Brian stories of her childhood, about making soup and knitting blankets for Russian soldiers that slept on the dirt floor of her family cottage, about walking several miles each day -- in lieu of attending high school -- to a textiles factory to provide for her family. Kasia's memory is impeccable, her bones strong, her spirit unshakeable, and her heart as other-centered and giving as you could imagine.

Brian's daughters, Molly and Fiona, are often served Kasia's famous soup when they visit at her home. They attest that this soup, is the best they have ever tasted. On this Saturday afternoon, Brian and the girls wanted to let Kasia be served. Kasia relented even though she does not enjoy people causing a fuss over her, she insisted on McDonalds and when told that there was no indoor seating at this time, relented and said IHOP would be OK. This is a four-year friendship that involves holiday gift exchanges, trips to Kasia's favorite Polish cafes in Port Richmond, and a whole lot of soup and love.